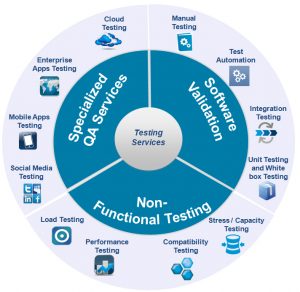 Automation testing which is also known as “Test Automation”, is when the tester writes scripts and uses another software to test the software. Automation Testing is used to re-run the test scenarios that were performed manually, quickly and repeatedly. It increases the test coverage; improve accuracy, saves time and money in comparison to manual testing.

Unit testing is performed by the developers before the build is rolled over to the QA team. Developers use test data that is separate from the test data of the quality assurance team. The goal of unit testing is to isolate each part of the program and show that individual parts are correct in terms of requirements and functionality.

Stress testing is performed to break the system by crushing or hiding its resources. This testing type includes the testing of Software behavior under abnormal conditions by applying load beyond the actual load limit to identify the breaking point.

Performance testing is used to determine the performance components of a system in a specific situation. It determines how much resources are used and how much system is scalable, reliable, responsible and speedy during performing the test.

Load testing the behavior of the Software by applying maximum load and manipulating large input data. It can be done at both normal and peak load conditions. This type of testing identifies the maximum capacity of software and its behavior at peak time.

Social media is the biggest platform to get the customer’s and informed about their services as a result numerous apps are emerging day by day. The major problem faced by social media applications is security of customer’s information as these applications can be easily hacked. Social media testing services helps to rapidly assess applications to prevent this kind of hackers attack.